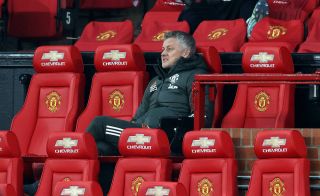 Manchester United will are planning to make late calls on some of their travelling squad members tomorrow night when they take on AC Milan away in the Europa League.

Ole Gunnar Solskjaer has named Paul Pogba, Donny van de Beek and Edinson Cavani in their 21-man squad but that doesn’t mean all have the green light to play.

Some players will be assessed before the match giving them all a late chance at the very least.

Pogba has been out since February 6 with a thigh injury, while Van de Beek and Cavani have also spent sustained periods in the treatment room. It will be a huge boost to have all three back, as well as Anthony Martial in the coming weeks.

“There are a couple that we need to assess if they’re available,” Solskjaer said, as per the MEN. “Martial is a definite no-go. Apart from that we’re assessing them as we speak. Some might travel still needing to confirm they’re available still.

“We’re assessing them, they’ve been involved in the training session and let’s see tomorrow if there’s a reaction. They all trained yesterday and hopefully no reaction.

“Shola [Shoretire] will be playing for the Under-23s (against Tottenham on Friday), so we felt it was right for him. Eric’s being assessed. And, with regards to the decision-making, on what team we’re going to play, let’s see how everyone feels tomorrow.

“Edinson has trained for a couple of days now and we’re still assessing him. When he’s in and around the club, his experience and influence on the others is great. He always tries to help everyone and when it comes to a game, he speaks to them.

“The lads look to him, hopefully there’s no reaction to the training sessions in the last few days.”

Ahead of a season-defining week, albeit one downplayed by the manager, it’s promising to hear we’ve got players returning from injury. We should definitely have a stronger squad to face Leicester City in the FA Cup quarter-finals, too.

It looks increasingly likely that Harry Maguire will be joined by Victor Lindelof at centre-back after Eric Bailly was left out of the travelling squad.