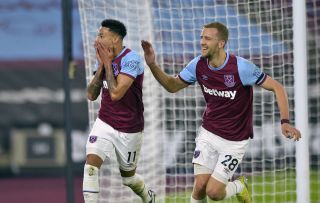 Manchester United loanee Jesse Lingard is reportedly back in contention to make the England international squad.

The Mirror claims Lingard’s form for West Ham since January has put him back into Gareth Southgate’s plans, ahead of the upcoming squad announcement.

Lingard deserves a ton of credit for turning things around so quickly because before the new year everyone would have laughed at the thought of Lingard making the squad for the European Championships this summer.

Now he could have a big opportunity to prove himself before the tournament kicks off.

Southgate announces his squad on Thursday with England set to prepare for a World Cup qualifying treble header with San Marino, Poland and Albania this month.

Lingard played a role in England World Cup campaign in 2018 but has fallen down the pecking order in the past two years. He has not played for the Three Lions since the summer of 2019.

The midfielder’s struggles at United led to Southgate leaving him out of his squads, but now he’s playing for West Ham as well as his way back into the England team.

Lingard has scored four goals for West Ham so far.