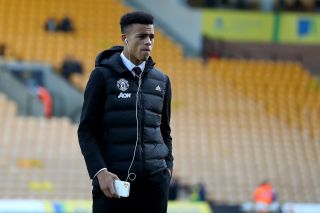 Aidy Boothroyd named his England U21 squad for the upcoming European Championships, with Mason Greenwood earning a spot in a strong squad.

The tournament, co-hosted by Slovenia and Hungary, will see the group stage played between March 24-31, before the knockout stages are held between May 31-June 6.

England face Portugal, Croatia and Switzerland in Group D — and each game will be live on Sky Sports from March 25

“I’m excited by this group – not just in their ability but also their togetherness and team spirit – and know they will do everything they can to make the country proud,” said Boothroyd (via the FA website).

“I’m grateful to Gareth for his support with what we are trying to achieve, and also to the clubs for recognizing the importance of these finals.

“We want to win every time we play and will do all we can to reach the knockout stage – but this is also a crucial opportunity for providing valuable experience on and off the pitch that will help the players, their clubs and England in future.”

Here is your #YoungLions squad for the #U21EURO group stage! 👊