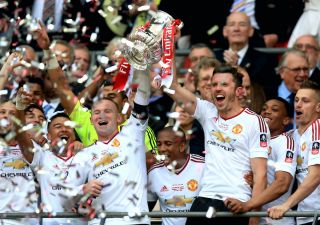 Fans living outside London could be stopped from attending the FA Cup final should their club reach that stage in May.

The government are still reassessing lockdown restrictions amid the coronavirus pandemic, and the FA Cup final on May 15 has been pinpointed as a pilot event in which a limited number of fans can attend Wembley for the match.

News of a potential 20,000-strong crowd will have fans excited about the prospect of United reaching the final this season, however, The Telegraph has now revealed that those in attendance could be limited to residents of London.

At least we are starting to see an attempt to bring fans back again.

A day out for the Cockney Reds?

This move was apparently put in place to stop the need for unnecessary travel but the only London-based side remaining in the FA Cup is Chelsea. That doesn’t make it very convenient given the rest of the clubs involved are not in London, but what are you going to do about that when the final is always held at Wembley?

Manchester United, Manchester City, Everton, Leicester, Sheffield United, Bournemouth and Southampton after all left in the competition, with the quarter-finals taking place this weekend.

Culture Secretary Oliver Dowden said: “[They] will be crucial in finding ways to get fans and audiences back in safely without social distancing.

“We will be guided by the science and medical experts, but will work flat out to make that happen.

“There is a strong recognition that came the late spring we need to start getting back to life as we know it.”