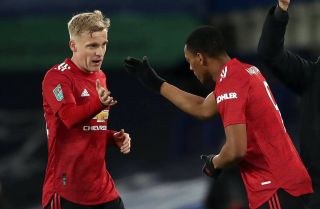 Ronald de Boer has come out to rubbish rumours Donny van de Beek has asked Ajax to re-sign him this summer.

Van de Beek, who joined Manchester United with plenty of promise ahead of the current campaign, has made just two Premier League starts under Ole Gunnar Solskjaer since his £39.6m move (via Transfermarkt).

There is constant speculation surrounding his future at the club, with reports suggesting the 23-year-old is ready to quit at the end of the season, as per the Daily Star.

Former Barcelona and Rangers midfielder De Boer spoke to talkSPORT 2 after a chat with Ajax and Van de Beek’s agent.

“I spoke to Ajax and they said there’s no truth in it at all. He didn’t ask to speak to them. He’s just focusing on his recovery on his ankle, and it’s not true that he asked Man United to leave.”

The article by the Daily Star actually states that Van de Beek had asked for showdown talks with Ed Woodward before asking for a move away – so maybe he hasn’t got to that point yet? But surely with his agent happy to rubbish the speculation, we can now move on and worry less about Van de Beek leaving and more about how he can fit into the side next season?

However, De Boer adds that he feels Van de Beek should consider his future unless something changes.

“His agent also told me that of course he’s not happy that he’s not playing. He’s only had two starts under Solskjaer and that’s not what he hoped for when he joined Man United.

“He has to have a review after a year, asking where do I stand? Do I have a possibility to succeed here or not? Otherwise, I have to make a move.

“We will see where he’s heading next year, maybe he stays at Man United or maybe another club is interesting for him.

“But he’s not panicking at all, he told his agent he’s so happy at Man United because the club is one of the best in terms of how they treat him, he feels loved.”

And with that, we put to bed that extremely unhelpful narrative that Solskjaer is treating Van de Beek unfairly.

“It’s only Fernandes who had no problem to adapt,” De Boer continued.

“It’s not a football thing, it’s the physical part. There are so many guys and within two years their physical appearance changes dramatically.

“In Holland, it’s nice with the ball but it’s not so physical. We have to give him time.”