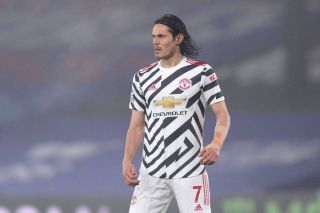 The Reds drew 1-1 at Old Trafford following a late equaliser from the Italians, leaving all the work for the reverse fixture, but at least several prominent players are returning to training after being sidelined with injuries.

David de Gea is back in the squad following the birth of his daughter, while Paul Pogba and Donny van de Beek return to give Ole Gunnar Solskjaer more options in midfield.

The only real negative is that Anthony Martial has not returned.

The biggest difference from this squad, and what we had coming up against West Ham last weekend, is Solskjaer has a striker.

Cavani spent six years playing in Serie A, making 12 appearances and scoring four goals against Milan. In September 2011, he scored a hat-trick against the Rossoneri for Napoli – in a season when he netted 33 goals across all competitions.

Unhappy memories for Milan because Thiago Silva and Alessandro Nesta were unable to stop him back then.