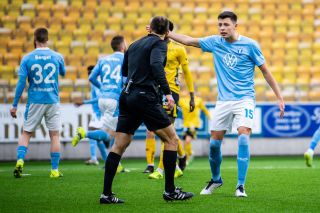 According to Fabrizio Romano, a well-informed football journalist who shares snippets of football information on Twitter, Premier League duo Manchester United and Chelsea are both tracking Malmo defender Anel Ahmedhodzic.

The 21-year-old centre-back is a former Nottingham Forest youth graduate so I can’t imagine it would be difficult for the club to do their homework on Ahmedhodzic.

However, he has played just seven matches for the Malmo first-team so far this season.

That doesn’t strike me as very promising when United should be prioritising a world-class defender to partner Harry Maguire. Of course, we’re not saying the club should take their eye off the ball with Europe’s brightest talents but this one doesn’t quite add up.

Romano reckons Ahmedhodric is preparing for a big move. He adds that despite both United and Chelsea taking an active interest in the Bosnian, it is Serie A side Atalanta who are leading the way to seal his signature.

Malmö have not received yet any official bid from Chelsea or Manchester United for Anel Ahmedhodzic as of today. The Bosnian CB has been scouted by both clubs as he’s one of the most interesting young CB in Europe, but Atalanta are in advanced talks to sign him. 🇸🇪 #cfc #mufc

Now is the time to act if United are serious about Ahmedhodric. I suspect they will just continue watching him next season as a potential target for the future.