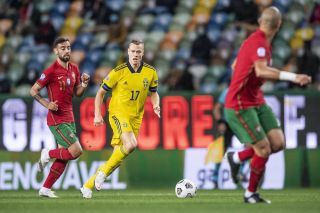 Ole Gunnar Solskjaer dropped a hint that Manchester United could block Bruno Fernandes from playing for Portugal if it meant he would miss games for his club upon his return to England.

Travel from the UK to Portugal is currently banned for most citizens.

It was looking like Premier League players in the Portugal squad were facing a length period of isolation if they travelled to their homeland until a change of location was made for their upcoming World Cup qualifier against Azerbaijan to Italy (Turin).

“We have not sat down and made a proper call on that one but it doesn’t make sense if you lose your player for 10 days’ isolation because we are the ones paying the players,” Solskjaer said prior to the change, as per The Mirror.

“From what I understand, that [being allowed to ban players travelling] is the rule.

“FIFA have given the rule that they don’t have to be released, so it is going to be a hard call to make to let them play in red-list countries.”

The change means Fernandes will be able to return to England without needing to isolate, so let’s hope there are no changes between now and then.

There’s always risk of spreading when players leave their squad bubble to join another — which is the main reason why I don’t know whether these qualifiers should be taking place.

United need Fernandes fit and ready for the remainder of the season, especially if we go into the international break still in with a chance of winning the Europa League and FA Cup.

That’s why it is such a huge week for United and there’s hardly any time to worry about a couple of qualifiers.

Should I be surprised the internationals are still going ahead? Talk about complicating matters that really don’t need to be complicated.