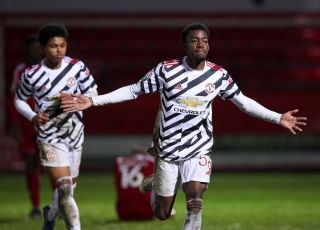 Manchester United have announced that Anthony Elanga has signed a new long-term contract with the club, as per ManUtd.com.

The 18-year-old won the Jimmy Murphy Youth Player of the Year award last season and has played for Neil Wood’s U23s side throughout the current campaign. After making 16 appearances, Elanga has eight goals and three assists.

That sort of form warrants a new deal for the Sweden youth international.

An interesting fact from the history books shows that his father, Joseph, played at the 1998 World Cup finals for Cameroon.

Now it’s about maintaining his development and making the next step into Manchester United’s first team. This may take a lot of time and hard work, or it may never happen, but he’s got a new contract because the coaches believe he can make the next step and the fans can only hope that’s the case.

It definitely helps having a manager who has faith in young players. Solskjaer learned those traits from the best, Sir Alex Ferguson, and it’s a tradition we are very proud of.