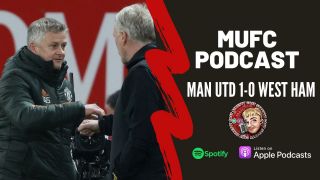 I don’t think anyone calls it the David Moyes derby but we do. Manchester United got over the line against West Ham who came to Old Trafford to defend.

The visitors sat back and welcomed pressure.

It didn’t work and as soon as they conceded an own goal they began to attack the Reds in numbers.

West Ham deserved to lose the game given how they approached it from the start. It was dull and exactly what you’d expect of 90 minutes of football with Moyes.

It was arguably one of Harry Maguire’s best performances in the shirt despite Luke Shaw being rewarded as MOTM. Mason Greenwood didn’t score but did everything else you would expect from a centre-forward.

This is the start of a tricky week for Ole Gunnar Solskjaer. Will be answer the next round of questions coming his way?

United have two cup games before the international break and the Norwegian needs to win a trophy.

Watch the latest episode of the Strettycast on Stretty News TV