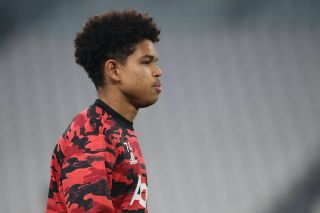 It’s the latest achievement for Shoretire, who signed his first professional contract with the club last month and has since made first-team debuts in the Premier League and Europa League.

The 18-year-old’s impressive showing in the 6-4 U23 victory over Blackburn at Leigh Sports Village helped him get his first-team chance and ultimately led to him receiving this award.

Shoretire netted a hat-trick for Neil Wood’s side as he starred alongside new signing Amad, who briefly shone for the reserves before making his way into Solskjaer’s first-team setup.

“Proud to receive the Premier League 2 Player of the Month award for February!” Shoretire tweeted after being photographed with the prize on Monday.

It is unlikely that Shoretire will be eligible for too many more PL 2 awards as he is now a regular member of Solskjaer’s match day squads.

The youngster could again be involved in some capacity in the Europa League second-leg against AC Milan at the San Siro on Thursday.

🏅 The #PL2 Player of the Month for February is… Shola Shoretire ✨

Proud to receive the Premier League 2 Player of the Month award for February! 😁🔴 pic.twitter.com/0X16waHxRG