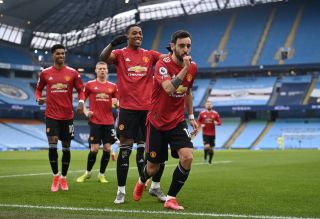 Bruno Fernandes could now be statistically defined as the most creative player in Europe’s top five leagues.

No player has created more chances than Manchester United’s totemic Portuguese midfielder this season across the continent, according to statistician Statman Dave.

Fernandes has been United’s creative fulcrum since his arrival at Old Trafford fourteen months ago and his impact has been so profound that it is no longer irreverent to compare him to Eric Cantona.

The 25-year-old is just one goal behind Liverpool’s Mohamed Salah in the race for the Premier League golden boot and is third for the most assists.

Craig Dawson’s own goal derided from Fernandes’ inch-perfect corner in the 1-0 victory over West Ham on Sunday and Fernandes now has a total of 26 goal involvements in the league this season.

In total, Fernandes has created 82 chances for his teammates in 29 appearances, six more than former United player Memphis Depay who is currently thriving for Lyon.

The impressive stat highlights just how much Fernandes is relied upon to be a productive outlet in Ole Gunnar Solskjaer’s side.

Jack Grealish, who United have previously been heavily linked with, has created seven less chances but has featured in seven less games, which is testament to his ability in a less capable Aston Villa team.

Bruno Fernandes has created more chances than any other player across Europe’s top five leagues this season. 🧙‍♂️ pic.twitter.com/vYL1b3uBrF