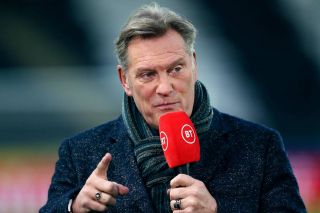 Glenn Hoddle has urged Manchester United to sign a ‘young Edinson Cavani’ during their search for a striker.

Every man and his dog will be aware that Ole Gunnar Solskjaer will be on the lookout for a world-class talisman up front unless Anthony Martial suddenly becomes the player we all hoped he would after joining from AS Monaco.

Borussia Dortmund’s Erling Haaland is the number one option – but not just for United, but every existing club in world football.

A bid is yet to materialise and it remains to be seen if United want to deal with Mino Raiola again after his frequent outbursts over the past year.

Speaking about United’s transfer dealings, Hoddle said (via Express): “Yeah [a striker] would be the [priority]. I think it’s got to be. You need a young Cavani.

“You’ve got Cavani at the wrong time. Five or six years ago, his movement, his hold-up play, everything he had and he’s got still.

“When he plays for United I see a different United team, even now at his age. And he’s not that old, what is he, 33?

“So Haaland would be the one but how are you going to get him? Have the days gone where if United were in for you, ‘oh I’m going to Man United’? It was Real Madrid or Man United.

“Those days unfortunately for United have gone, they’ve got to build that up again.

“But Haaland would be on everyone’s lips, everyone would want him.”

I don’t know a United fan who would say no to Haaland in the summer or at some point in the future. He’s the real deal and whoever lands him will have a great chance to dominate in their league.

It’s not often you see goalscorers like Haaland, so young with so much time to get even better.