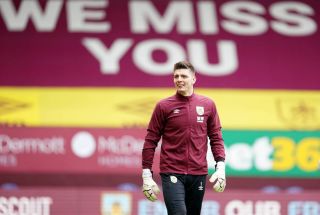 Manchester United are reportedly lining up a move for Burnley goalkeeper Nick Pope in the summer.

Pope, 28, is said to be on Ole Gunnar Solskjaer’s wish list this summer and according to The Express, United are ready to make a move.

Burnley are estimated to value Pope at £50 million, but it is thought that the Clarets would be willing to part ways with Pope for a slightly lower fee.

The battle to be United’s number one has intensified over the past year or so.

For some time, David de Gea has been undroppable but with the Spaniard, now 30 years of age and his best days now appearing to be behind him, United have been looking at alternatives.

While Dean Henderson has filled in, I don’t think he has the experience needed to be United’s full-time number one which begs the question, would Nick Pope be a suitable candidate to replace Dave?

Having flourished at Burnley over the past few seasons Pope has become one of the finest goalkeepers in the Premier League. Standing at 6 feet 3 in between the sticks Pope is an intimidating figure and has been one which has arguably been Burnley’s star performer this season.

To take over the reigns from De Gea will be no easy task and for Pope I feel that pressure may be too much. Solskjaer needs a world-class goalkeeper who he can rely on when called upon to do the businesses and I don’t feel Pope is that man.

By no means is Pope a poor goalkeeper far from it in fact but I feel the pressure of being Manchester United’s number one may be too big of a step and given the hefty price tag of £50 million I feel United could be getting better value for money elsewhere.