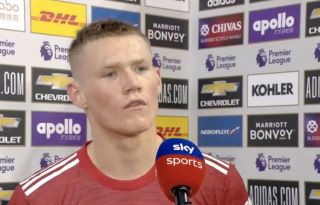 United were gifted a 1-0 lead early into the match’s second-half following a fortunate own goal from Hammers’ defender Craig Dawson.

Despite the game running out 1-0 to the Red Devils, Solskjaer will consider Sunday’s win as a well-deserved victory.

Speaking after the game, commanding midfielder McTominay has lifted the lid on what his Norweigan gaffer told him and his team-mates to do in order to take all the points.

“The message at half-time was just keep it the same,” McTominay said. “Keep trying to play at your best tempo you can possibly play at.

“Keep working the ball side-to-side and eventually, we’ll get an opener and sometimes it is from a set-piece, a fortunate one as well.”