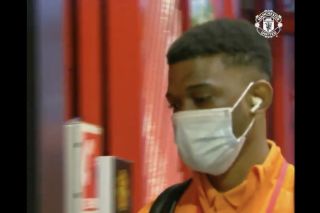 Sunday’s match, which is tipped to be an enthralling encounter, will see two of England’s best sides go head-to-head.

West Ham are arguably this season’s surprise package – Currently sitting in fifth place, three points behind Chelsea but with two games in-hand, it’s safe to say the Hammers are punching well above their weight.

Elsewhere, Ole Gunnar Solskjaer will be hopeful he can build on his side’s current domestic form.

After remaining unbeaten in their last eight Premier League matches, the Red Devils will be desperate to make it nine and in turn, ensure rivals Manchester City do not get even closer to the title.

Ahead of Sunday’s exciting match, the United players have arrived at the Theatre of Dreams.

Time to put on our game faces, Reds! 😤