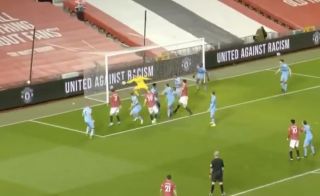 Manchester United, although deserved, have been gifted the lead in Sunday’s crucial Premier League tie against David Moyes’ West Ham.

Coming into the match, this season’s surprise package, West Ham, would have been confident they could take at least a point away from Old Trafford – Something they rarely manage to achieve.

However, Ole Gunnar Solskjaer’s notoriously difficult to beat Red Devils have been the side to draw the first blood.

A corner in the early stages of the second-half, taken by midfielder Bruno Fernandes, invited Scott McTominay to rise for a header.

However, despite the ball finding it’s way past the Hammers’ goalkeeper, upon closer inspection, it became clear defender Craig Dawson had unintentionally guided it in.