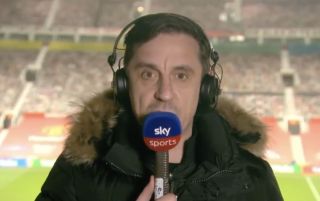 United fans have been calling for a recruitment specialist to help with transfer planning since Sir Alex Ferguson retired.

Despite the relentless links and constant disappointment, Red Devils fans were recently met with the news that the club’s hierarchy had in fact heeded their cries.

Wednesday’s news brought with it confirmation that the club had appointed John Murtough as football director and ex-midfielder Darren Fletcher as technical director.

Speaking after United’s important 1-0 win over West Ham on Sunday, Neville has offered his thoughts on the recent internal changes.

“It’s quite clear that the direction of the club is to go down a path of people who know the DNA and understand the DNA of the club.”

🗣 “The direction of the club is to go down a path of people who know and understand the DNA of the club.”@GNev2 reaction to the internal changes that have happened at Manchester United this week pic.twitter.com/KBljEoe0nN