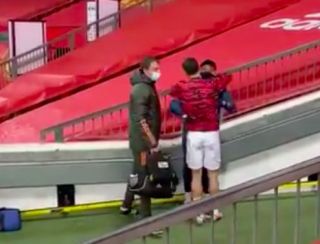 Lingard is ineligible to play for West Ham against parent club United but was still in attendance and made his way to the tunnel during the warm ups.

The 28-year-old is a big miss for the Hammers after an impressive impact in his short loan spell under David Moyes.

It is unclear whether Lingard has a long term future under Ole Gunnar Solskjaer but he still shares great relationships with those on and off the field at the club.

Lingard was greeted by Marcus Rashford as United came out for their warm up and acknowledged by several other teammates.

As United came in after pre-match preparations, Fernandes, who effectively kept Lingard out of Solskjaer’s plans this season, hugged and chatted to the midfielder.

See the clips below, courtesy of United Head of Social Nick Speakman and the club’s official twitter account.

Out for the warm-up!