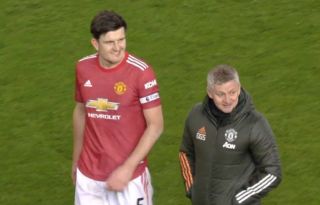 Harry Maguire doesn’t often get credit but he was a wall at the back tonight.

On top of that, Manchester United as a team dealt with a lot of pressure in the dying moments of the match, clinging on to a one-goal lead.

They managed to do what they failed to do on Thursday night against West Ham.

Maguire was massively influential as a leader at the back — it’s just a shame we haven’t been able to say that throughout the campaign to date.

The fact United have kept four successive Premier League clean sheets — for the first time since December 2017 — suggests that while our build up play is lacking at the moment, something seems to be working defensively. (Stat via Sky Sports Statto)

The back four tonight did well to close out West Ham when the Hammers decided to play football, after going behind thanks to a deflection off a Scott McTominay header.

⛔️ Man Utd have kept 4 successive PL clean sheets for the first time for over 3 years, since Dec 2017 – Jan 2018 under Jose Mourinho pic.twitter.com/yqpv0EOpM2

It would be nice to see this run continue as we’re currently nine points clear of the chasing pack for a place in the top four.

West Ham made it hard for us tonight but the lads got over the line.