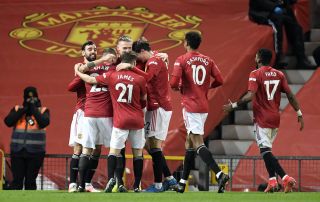 Recovered well after a nervy moment. Error in midweek would have played on Henderson’s mind but he was tidy with his work. 7

Picked up knock in face from Antonio but then put in one of his most accomplished defensive efforts, including crucial block on Bowen. 8

Watched isolated Antonio comfortably before the break and challenge intensified when West Ham decided to play. 7

Shaw is now the complete left-back and one of United’s most prominent creators. He barely put a foot wrong at either end. 8

United’s midfield lacked quality in first-half as Pogba’s absence again came to mind. Fred was untidy on the ball and rarely thrives against low-blocks. 5

Regularly picked up advanced position as United looked to find breakthrough but he was lacking guile. Remained positive and forced Dawson own goal for three points. 7

Squandered great counter-attacking opportunity with meagre pass to Fernandes. Perhaps should have been brought off for Amad.  5

Inexcusable miss in first-half and didn’t look to have fully shaken off injury. Made some promising runs but couldn’t provide decisive moment. 5

Quality cross to Rashford warranted an assist and unlucky to strike post twice. Impressive leading the line and deserved a goal. 7