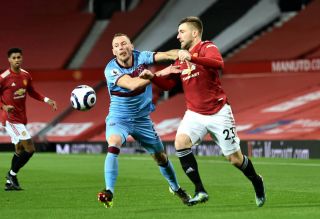 Luke Shaw is in the form of his career.

Tonight was another example of how he’s become an accomplished full-back for United this season.

The recent months you could argue Shaw has been United’s main threat going forward. He seems to add a drive to our attack which seems to be an area of his game that has improved under Ole Gunnar Solskjaer.

There is no denying he was United’s best player tonight.

The best left-back in England offered width regularly and teammates are now starting to look for him on the pitch, knowing what he can now offer in the final third.

Shaw also made a big block towards the end of the match and United held on.

Thanks to Sky Sports Statto we’ve got a number of post-match stats to look at from Shaw’s performance.

He touched the ball 106 times, made 3 tackles and gained possession on three separate occasions. His pass completion rate was impressive and he created 2 chances for his teammates.

On top of that, it was Shaw’s seventh clean sheet in his last 11 completed Premier League performances.