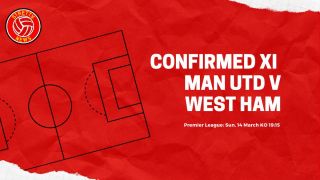 Manchester United are looking to climb back into second place in the Premier League with a win over West Ham.

Leicester City had a big win over Sheffield United earlier today so it’s down to us if we want to end the weekend in second. It would be a shame to fall behind when we know exactly what we need to do tonight against the Hammers.

No surprises in defence with Aaron Wan-Bissaka at right-back, Luke Shaw on the left, and a centre-back pairing of Harry Maguire and Victor Lindelof.

Scott McTominay and Fred start in midfield with Bruno Fernandes.

Daniel James, Marcus Rashford and Mason Greenwood will be expected to make things happen in the final third.

Ultimately, I want to see United start today’s game on the front foot. We start games too slowly and were lucky not to be two goals behind in the first 20 minutes against AC Milan on Thursday night.

It would probably make for more comfortable viewing.