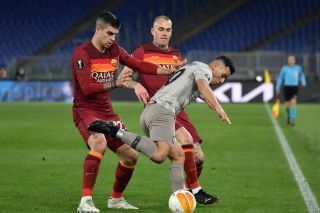 It has been claimed that both Manchester United and Chelsea are watching 24-year-old Roma defender Gianluca Mancini.

The Italian, who joined Roma in 2019 initially on loan from Atalana, has put in several performances to warrant a place on United’s radar, with the club actively looking to strengthen their defense ahead of next season.

According to the Express, Mancini is attracting the interest of both Premier League clubs and Roma could cash in for just £27m due to a loss in revenue this year (via SportsProMedia). A lot of clubs will make a loss this year and that is likely to restrict spending across the continent.

Mancini played as part of a back three in Roma’s 3-0 win over Shakhtar Donetsk in the Europa League on Thursday night, when former United defender Chris Smalling was named was an unused substitute. It’s not a system Ole Gunnar Solskjaer tends to play — but Mancini may still have the attributes United are crying out for in their back four.

Smalling discovered a new lease of life at Roma last season – on loan – and did enough to secure a permanent transfer in the summer.

It wasn’t without a saga though as Roma took their time coughing up the money United demanded for the English defender’s signature.

A year on and we’re still on the lookout for a top centre-back to partner Harry Maguire.

Victor Lindelof is not the man and Eric Bailly doesn’t stay fit long enough to get significant runs in the team. That must be really frustrating for Solskjaer, who is still unsettled on his back four two years down the line.

It is a problem that needs to be addressed.