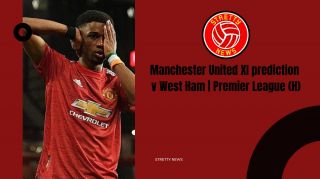 Most of the problems are in attack, too, with matters worsening after Thursday night’s 1-1 draw against AC Milan at Old Trafford.

Anthony Martial, Marcus Rashford and Edinson Cavani are all nursing knocks with the hope of at least one or two of them returning for Thursday’s second leg versus Milan.

It would make a big difference to Solskjaer’s pre-match plans if one of these attackers proved fit to face the Hammers on Sunday.

I’m going to predict an inexperienced attacking trio for when United play host to West Ham, including Mason Greenwood, Daniel James and Amad Diallo. The young Ivorian scored off the bench in the 1-1 draw midweek and Solskjaer hasn’t got many other options.

United have absentees in midfield too: Paul Pogba, Donny van de Beek and Juan Mata. It will be a shame being without two midfielders who made goal contributions in the December win at the London Stadium.

Bruno Fernandes will start with Scott McTominay and Fred – allowing for Nemanja Matic to drop out.

I’m expecting a back four of Aaron Wan-Bissaka, Victor Lindelof, Maguire and Luke Shaw – with Dean Henderson getting a chance to bounce back from his midweek horror.

That’s four changes from the draw with Milan.