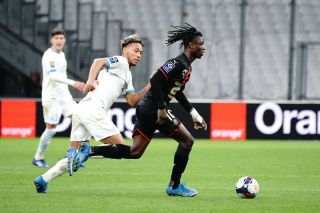 Manchester United could move up a place and steal the lead on Real Madrid in the race to sign Rennes midfielder Eduardo Camavinga.

The 18-year-old is widely regarded as one of Europe’s most highly-rated midfielders.

Camavinga is not expected to wait around at Rennes for long with the amount of interest in his signature rising significantly and I wonder if this will be the summer he departs France.

The teenager has been linked with a move to Real Madrid, but a recent report from AS highlights the Premier League as a possible destination for Camavinga.

AS claims that due to how badly Los Blancos’ finances have been impacted by the ongoing pandemic, it could be United or Chelsea who land the French youngster.

Camavinga will be hoping to play Champions League football whenever he goes because he will be watching the likes of Kylian Mbappe and Erling Haaland tear it up on the biggest of stages this season.

One of two additions to our midfield should be on the cards in the coming months.