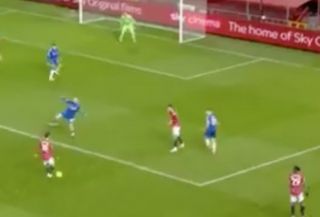 It was an incredible goal to double our lead but we still managed to draw 3-3 on the day against Everton.

The Portuguese playmaker dummied Fred’s pass on the edge of the box as space opened up for a shot when he was found by Aaron Wan-Bissaka.

Fernandes doesn’t usually need a second invitation and he struck a curling effort to beat Robin Olsen, who was playing in place of Jordan Pickford.

Some argued the goal resembled the nonchalance and ingenuity of Eric Cantona, but we think that’s an example of clutching for straws.

See the goal below, footage courtesy of MUTV: