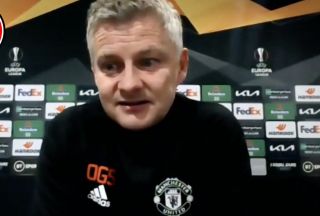 David de Gea is back in Manchester following the birth of his daughter.

The Spanish goalkeeper was given extra paternity leave to spend time with his partner and firstborn.

In place of De Gea stands Dean Henderson and before last night a lot of Reds felt the young goalkeeper had already done enough to warrant the number one role between now and the end of the season.

United still have a lot to play for and ultimately it will come down to whoever Ole Gunnar Solskjaer has most trust in. It will be interesting to see how Henderson responds to last night’s costly mistake against AC Milan.

We know keepers make mistakes and more often than not that leads to goals. It feels like the magnifying glass is on Henderson now, but he must learn how to deal with that if he wants to be first choice at Old Trafford.

The manager gave a brief update on De Gea in his pre-match press conference before United take on West Ham in the league.

He said: “Yeah, David is back in Manchester quarantining or self-isolating. He’s just touch and go for Sunday I think.”

Simon Stone from the BBC then asked if De Gea is allowed to train at Carrington while self-isolating.

“I think the rules are he’s got to stay at home. He’s not training with us anyway.”