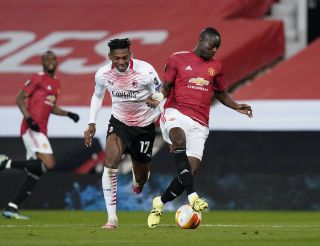 Eric Bailly made his 100th appearance for Manchester United last night as the Reds drew 1-1 with AC Milan at Old Trafford.

It wasn’t the result Ole Gunnar Solskjaer or fans wanted in the first leg of our Europa League Round of 16 tie, and it means we must get a positive result next week in Milan.

The match marked a milestone for Eric Bailly – arguably one he would have surpassed a long time ago if it wasn’t for injuries – with the Ivorian becoming a centurion at the club.

Manchester Evening News reporter Samuel Luckhurst took the opportunity on Thursday night to ask the manager about Bailly’s future, with the defender’s deal set to expire next year.

Solskjaer was happy to confirm that United have started talks with Bailly and his entourage over a new deal to keep him at the club.

“We’ve started talking to Eric and Eric’s representatives. Eric is keeping fit for longer and you can see his performances as well,” Solskjaer told the press. “I’ve been very happy with him.

“His playing style sometimes has made him lose too many games. 100 games? That’s not enough for the period he’s been here. He’s getting more and more robust so yeah, he’s one we’re talking to.”

Good news for Bailly but United still need to dip into the transfer market this summer to sign a centre-back.