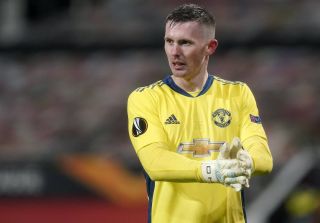 AC Milan will take a slender advantage into next week’s second leg after a late Simon Kjaer leveller secured the all-important away goal. United – heavily depleted by injury – had gone ahead through Amad’s stunning opener as the 18-year-old announced his arrival at Old Trafford. Solskjaer’s United will need to score in the San Siro and face a difficult examination against a lively, impressive Milan side.

Here is what we learned from Old Trafford

The Reds had an already crippling injury list with Paul Pogba, Donny van de Beek, Juan Mata, Edinson Cavani and Marcus Rashford all sidelined. It left Solskjaer with an XI that virtually picked itself, and indeed the lack of options was evident in his substitutions with only two attacking players on the bench – both of them young kids. To quite literally add insult to injury, Anthony Martial was forced off at the interval to leave United without a recognised striker and Mason Greenwood shoehorned into the no.9 position. It gave Adam Diallo his first full half of football in a United shirt, but it’s far from ideal to have such a thin, stretched squad at this stage of the season. Luke Shaw, too, is carrying an injury but came on during the second half. United’s left hand side was virtually non-existent and we need to get some of these absentees back soon. With the visit of in-form West Ham in four days time, the Reds will have a depleted side.

Did Solskjaer get it wrong?

As already mentioned, there was no problem with the starting XI – given the injuries we had, there was really no other option. He was forced into bringing Amad on when Martial picked up an injury but the decision to take Bruno Fernandes off was baffling. We’ve seen several times this season that United can barely sustain an attack without the string-pulling influence of the Portuguese schemer, so with Milan growing into the game and United 1-0 up with 17 minutes to go, there was little justification for keeping him on. Fernandes got a wonderful assist and came alive in the second half, finding space and taking him off was asking for trouble. Without their key schemer, United’s attack disintegrated. This reminded me of the Leipzig away game when Solskaer put on three defenders with the game in the balance and the Reds in need of a result. Here, he put two left-footed players on and went to a back five, trying to sit on a 1-0 and inviting Milan on.You can’t do that in Europe, especially not against a good side like Stefano Pioli’s Rossoneri. Of course, there’s still the second leg to come but United have made it hard for themselves.Fred did next to nothing apart from run around a lot but yet Scott McTominay played the whole game despite walking a metaphorical tightrope. It almost cost us as McTominay narrowly escaped a second booking – shades of Fred against PSG in the Champions League. It is worrying and suggest Solskjaer is not learning from his mistakes.

Amad Diallo lit up Old Trafford with a brilliant piece of instinctive opportunism. Having come on at half-time, Diallo drew first blood in the tie with his excellent, Chicharito-esque header to announce his arrival in a Red shirt. Brilliant vision from Fernandes picked out Diallo and he met the sublime delivery with a clever, no look, back header.  After a few brief cameo glimpses of the highly-rated teenager, we saw exactly why United have spent £37m on the teenager. This competition is synonymous with United youngster making their mark – just ask Marcus Rashford all about that, and Martial’s misfortune proved to be Amad’s Rashford moment. With United’s attacking options thin on the ground, we’ll be seeing a lot of the more of the young Ivorian. It’s just a shame there were no fans to witness his coming of age moment.

Heavyweight clash of the titans in the Europa League

It wasn’t so long ago that Manchester United against AC Milan was a heavyweight clash in the Champions League. The sides met in two semi-finals of that competition in 2005 and 2007, with Carlo Ancelotti’s Milan – boasting the stellar talents of Kaka, Clarence Seedorf, Cafu, Filippo Inzaghi and Gennaro Gattuso –  getting the better of Sir Alex Ferguson’s young, emerging side – Cristiano Ronaldo, Wayne Rooney, Rio Ferdinand and Paul Scholes et al. With ten European Cups between them, this is a fixture synonymous with Europe’s grandest stage, so it was perhaps a sign of the times that these two sleeping giants find themselves slumming it in the continent’s second tier tournament. There have been signs that these two former forces are returning to a brighter future, with both in second place in their domestic league, but there is still a way to go before either return to former glories.

Dean Henderson will come in for flak as he should have done better with Kjaer’s late equaliser. He didn’t come for the ball and should have been more commanding, but it’s a learning curve for a man who has been pretty much faultless in every game. Henderson had no chance with Franck Kessie’s contentiously disallowed equaliser but definitely should have dealt with Milan’s late, late equaliser. That aside, he has kept nine clean sheets in 15 appearances for United this season and has been a fine deputy for David de Gea, so it would be churlish to criticise him too much. There’s no hiding place as a keeper, and it will be a learning curve for Henderson. Setbacks are part of the game, he shouldn’t become too disheartened. It’s merely a bump on the road to him becoming number one.