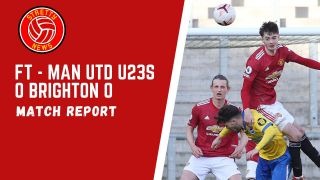 Our Reserves were back in action this afternoon as they hosted Brighton & Hove Albion U23’s at Leigh Sports Village. As the U18s played their FA Youth Cup game on Wednesday, changes came with Fernandes on the bench.

Shola Shoretire was in the bench last night against AC Milan, but started the game today as he will need to play regularly. The first team may have been hit an injury crisis, but given Shola’s young age; it cannot be expected to burn him so early. As the game kicked off, United were immediately on the ball, dominating the game early on.

It has been United in the beginning, but Brighton seem to have settled and they started moving quite well, as Galbraith has been busy with the ball recoveries several times so far. However, United have to settle for 10 men as a late challenge on the edge of the United box sees Will Fish pick up a straight red. Well, not much could be argued with the decision as Fish was caught out of position and it was the last player.

Neil Wood is obliged to make a few arrangements, as now the Reserves’ captain will move in defence alongside Max Taylor. Not the first time this happens, but the task will be hard this time. It seems like a 4-4-1 now, but with Hugill also dropping to help the team organize. The referee also says no penalty as Reece Devine makes a hard challenge to save United.

Our U23s have been playing and organising quite well at the back, but also trying to move forward. Ethan Galbraith’s pass finds Hugill who is brought down by Wakely and the Brighton youngster is shown a yellow card for the challenge. United were asking for a red here, but the referee waves away those claims as the situation was indeed different.

Martin Svidersky’s free kick is saved, but at the moment the young reds are doing much better than expected. 25 minutes in and United are trying to settle and put some pressure high up the pitch even with one man down. Brighton seems to be inviting pressure, as well. Some misplaced passes and United invite danger again, but Max Taylor and Kovar are well positioned. It does not end here as Matej Kovar makes another brilliant save as he tips over a Furlong shot that seemed to be going in.

Difficult to understand what Brighton players find so appealing of that United box that they keep falling over and over again. Gladly the referee has seen light as their penalty claims have been waved away. Shoretire and Hugill have been the only ones moving forward as Shoretire’s free kick was tipped over. It should also be noted that Reece Devine’s run down the wing was powerful and Brighton had to concede a foul there.

The Reserves did not make much of the two corners they had and Brighton again appear in United’s box and force a one on one save from Kovar. It may be an understatement how brilliant Kovar has been so far as United almost concede from a corner, but the Czech is right on position. The referee blows the whistle and it is half time at Leigh. Probably not what I was expecting, but under the circumstances, United have done pretty well.

Brighton start the game on top as even our number 9, Joe Hugill has dropped again to defend the team. Also, Reece Devine has been quite busy with a brilliant tackle and a brilliant block, seconds later. The wind surely will have an impact on the game. Hugill and Svidersky doing brilliantly to move United forward while Shoretire playing on the left is putting Brighton in danger. Since then, Brighton has picked up, but both teams are just misplacing passes at the moment. Later on, it is Galbraith who clears the ball that finds Devine who passes to Shoretire. Shola does incredibly well to flick the ball and get it back to Devine who then goes past two Brighton midfielders, but a clear challenge on him gets the ball back to Brighton.

In the 64-th minute, manager Neil Wood makes to changes as Svidersky and Shoretire come off for Fernandez and Dillon Hoogewerf. Another change in tactics for United as Devine is moved at the heart of the defence while Ethan Galbraith moves in midfield again. Hoogewerf almost makes an instant impact as Dillon cuts down from the left and curls an effort; however the keeper is well in position. It is Dillon again, but his shot is far away.

Well, in the following minutes United are in alert as Brighton keep pushing as Kovar and Fernandez are able to shut those chances down. Fernandez then did well to get in the Brighton box who passes to Helm, but he cannot convert from six yards and has his shot deflected. Hugill cannot also make that shot count in the rebound.

In the last ten minutes of the game, Brighton are insisting once again and Kovar is forced to make two brilliant saves. The end cannot come soon enough for United as they are struggling to salvage a point here. In the 85th minute, Kovar is once again United’s savior as he denies Ferguson in a close range. Being honest here, I have lost count of those Kovar saves now.

Not much to tell here now as the United players have been playing in a very mature today, organising well and trying hard to create chances upfront. A brilliant run from Hugill followed by a pass down the middle almost finds McCann, but the ball is cleared. The referee blows the whistle and United have indeed earned a hard – fought point.