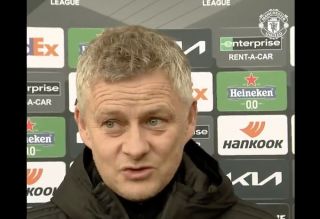 Speaking ahead of his side’s important Europa League knockout match against AC Milan, Manchester United manager Ole Gunnar Solskjaer has admitted he’s happy with the amount of European experience at his disposal.

Ahead of the exciting encounter, which is set to be played at Old Trafford, Solskjaer has named one of his strongest available starting 11, which includes four changes from their last time out.

Speaking before Thursday night’s kick-off, the Norweigan boss has spoken positively about the wealth of European experience among his squad’s ranks.

“For us as well – Mason who takes over from Marcus so we feel it’s a strong team.”