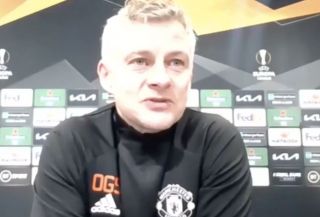 In what was a largely disappointing game, United fans will be left feeling gutted after a last gasp equaliser from the Rossoneri pegged back Amad’s first-ever goal for the club.

Despite the crushing end to the match, the match’s highlight moment came from midfielder Bruno Fernandes.

After taking a free-kick quickly, the Portuguese playmaker played a pin-point lobbed through-ball right into Diallo’s path, who went on to score a ‘Chicharito-style’ header.

Speaking to reporters after Thursday’s game, Solskjaer was quick to remind them just how important a role Fernandes played, once again.