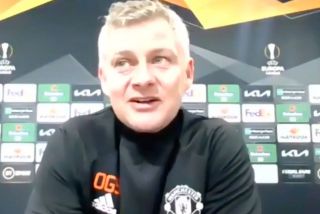 Martial limped off at half-time in visible pain at Old Trafford and was replaced by teenage forward Amad who scored his first goal for the club.

The French forward’s knock is the latest setback for Solskjaer who has struggled to keep his attacking assets match fit in recent weeks.

Marcus Rashford was ruled out of the AC Milan fixture due to an ankle injury picked up after tracking back in the derby victory over Manchester City last Sunday.

United missed Rashford’s dynamism on the left against the Italian giants and Solskjaer noted that he remains a doubt for this Sunday’s Premier League game against West Ham.

But the United boss hopes the England international will have made a full recovery to return for the second-leg at the San Siro next Thursday.

Edinson Cavani suffered a setback in training before the Manchester derby after returning from a muscular problem and wasn’t included in the squad against AC Milan.

Solskjaer added that the Uruguayan forward won’t be available for West Ham on Sunday and it is unclear if he will be fit enough to feature in the second-leg in Milan in a week’s time.

"There's another forward that we need to scan and look at!"