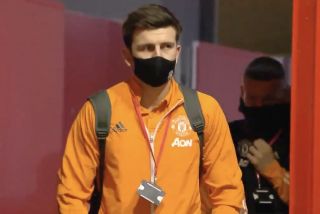 Ole Gunnar Solskjaer and his Manchester United squad have arrived at Old Trafford ahead of their eagerly anticipated European tie against AC Milan.

Thursday evening’s game will see two of Europe’s biggest names go head-to-head for the chance to gain an advantage heading into next week’s second-leg.

Ahead of the exciting match-up, despite making five changes, Solskjaer has named a strong starting 11, which includes Alex Telles coming in, in place of Luke Shaw.

Thursday night’s match, which is being played at Old Trafford, is set to be an exciting encounter, with two of the Europa League’s best sides looking to get off to a winning start in the Round of Last 16.

With kick-off less than 45-minutes away, Solskjaer and his players have arrived at the stadium.