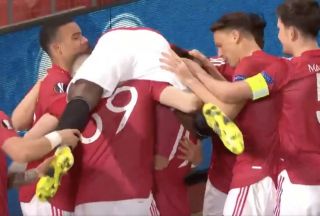 Manchester United’s flamboyant defender Eric Bailly has lived up to his hilarious and light-hearted reputation.

Despite the game eventually ending 1-1 after the Rossenari equalised at the death, it’ll be United’s new wonderkid, Amad Diallo, who steals all the back page headlines.

In what was his first senior goal, the Red Devils’ new teenage talent opened the game’s scoring after being on the pitch for just five minutes.

You just cannot love the man.

Only on the pitch five minutes and he opens the scoring with a brilliant backwards header 🔥#UEL pic.twitter.com/XHBIflKmbx