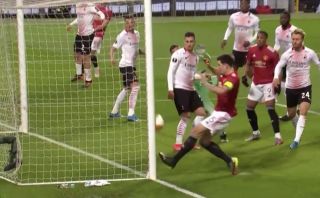 Manchester United captain Harry Maguire will be wondering how on earth he hasn’t gifted his side the lead against AC Milan in Thursday night’s Europa League knockout match.

In what has been a disappointing first-half from the Red Devils, Ole Gunnar Solskjaer would have been certain his side had taken the lead just shy of the break.

A whipped in a corner from Alex Telles fell perfectly to Maguire who was just inches away from the goal-line.

Despite making a connection with the ball, the skipper’s skewed effort somehow managed to stay out of Gianluigi Donnarumma’s net.

“It’s come off his shin pad! How has he missed!”

Harry Maguire looked baffled as to how the ball didn’t go in 😬#UEL pic.twitter.com/6uemabE2vQ