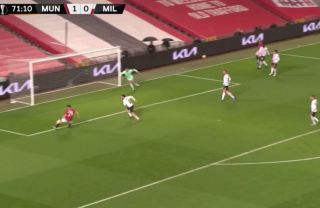 It seems like Daniel James didn’t expect the cross to be drilled hard and low across the box, but what else was he expecting?

The Welsh winger has played well lately and is deserving of more minutes in the first team — but he will be disappointed not to add to his account tonight against AC Milan.

Ole Gunnar Solskjaer made three substitutions shortly after the miss, which included James going off along with Aaron Wan-Bissaka and Bruno Fernandes.

The move into the box saw Mason Greenwood play a quick pass exchange with Amad Diallo, the scorer of United’s only goal so far, before a cross was played into James’ path.

The ball crashed off his leg and went out for a goal kick.