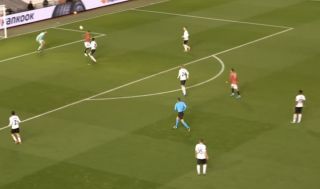 Manchester United’s wonderkid is off to a flyer!

After being subbed on at half-time in place of Anthony Martial during his side’s Europa League tie against AC Milan, Amad has bagged his first-ever senior goal for his new side.

Despite what was a stunning chipped ball over-the-top from Bruno Fernandes, Amad still had it all to do.

The teenager, under all the pressure in the world, did not disappoint.

Seemingly with his back to goal, Amad opted to go for an audacious ‘Chicharito-style’ header.

The 18-year-old successfully managed to loop the ball over AC Milan’s Gianluigi Donnarumma, despite the Italian standing at over six feet, five inches tall.

Only on the pitch five minutes and he opens the scoring with a brilliant backwards header 🔥#UEL pic.twitter.com/XHBIflKmbx