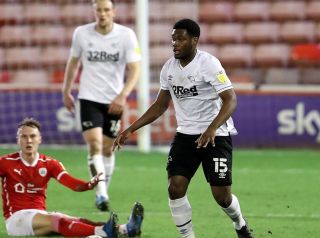 Derby County and Barnsley battled out a goalless draw in their Championship clash on Wednesday night, and Manchester United youngster Teden Mengi was involved.

In tricky conditions, and on a difficult playing surface, both sides will be happy to come away with the point.

Derby avoided a third consecutive defeat under Wayne Rooney – but in doing that they stopped Barnsley’s impressive winning run of seven games on the trot.

Manchester United loanee Teden Mengi took to Twitter after playing in the match. He tweeted: “Brilliant team effort tonight & good to get a clean sheet! We’ll take the point and move on to the next.”

Brilliant team effort tonight & good to get a clean sheet! We’ll take the point and move on to the next 🚀 @dcfcofficial pic.twitter.com/GoFOonWOYj

It’s great for Mengi to be playing Championship football and we all hope he will be a better player for it next season.

United will be looking for a defender in the transfer window and Mengi is young enough to go out and gain more experience on loan next season. Rooney may even want him back playing for the Rams?