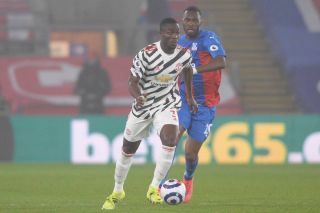 We don’t want to jinx it because the last thing Eric Bailly needs now is another injury, but hopefully tonight is the start of a long run in the team for the Ivorian.

I am of the opinion Manchester United are better defensively with Eric Bailly partnering Harry Maguire instead of Victor Lindelof. It doesn’t help the manager’s case that Bailly can’t stay fit but when he does there’s no denying who is the better suited partner for the skipper.

Tonight he starts against AC Milan alongside Maguire so it’s another chance to prove his worth as United aim to reach the next round of the Europa League.

But a huge congratulations to Bailly on making his 100th appearance for the club. He should have money but hopefully he meets this milestone as well as a turning point in his career. A brilliant defender on his day, and the reason we want a new centre-back in the summer is down to a number of factors including Bailly’s fitness.

❤️ @EricBailly24 is set to become a United centurion! 💯

Solskjaer was asked about Bailly being in the starting line-up tonight, as quoted in the tweet below:

Solskjær: "I don't want to jinx it but he's [Bailly] kept fit for longer now. You can see his performances when he plays – he's more confident in himself, so hopefully today he'll prove again what good a player he is." #mulive [mutv]