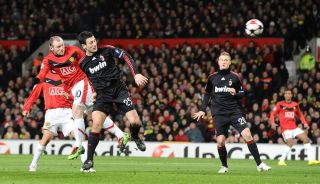 Manchester United’s attention turns to AC Milan tonight at Old Trafford in the first leg of the Round of 16 in the Europa League. In their first encounter in 11 years, the Red Devils meet the Rossoneri for the first-time ever in Europe’s second tier competition – a sign of both clubs diminished stature and struggles over the last decade.

Both clubs have such a distinguished history of success in European football winning 10 European Cups (Champions Leagues) combined, and will be expected to challenge to win the Europa League this season.

United are the only club remaining in this season’s competition to have won the Europa League since it was renamed in the 2009/10 season, winning the competition under Jose Mourinho in 2017 when they beat Ajax 2-1 in the final.

The Rossoneri have only ever progressed as far as the semi-final twice in 1972 and 2002. Ole Gunnar Solskjaer’s side progressed into the last 16 of the Europa League after comprehensively beating Real Sociedad 4-0 over two legs in the round of 32. Meanwhile, AC Milan advanced to the next round 3-3 on away goals against Serbian side Red Star Belgrade. Over the years, both Manchester United and AC Milan have had some memorable European ties, and hopefully both teams can deliver another unforgettable cup tie.

Tonight will be the 11th meeting between Manchester United and AC Milan in European competitions, with all ten previous meetings coming in the European Cup/Champions League. The head-to-head record going into this encounter is inseparable with five wins each. The last time both sides met came in the last 16 of the 2009/10 Champions League when United advanced to the quarter finals with a 7-2 aggregate win including a 4-0 victory at Old Trafford.

AC Milan’s most memorable victory over United was almost 14 years ago in the 2007 semi-finals of the Champions League. The Red Devils won the first leg 3-2 at Old Trafford courtesy of a stunning last minute Wayne Rooney goal, whilst Brazilian superstar Kaka scored two vital away goals for the Rossoneri. The first leg at Old Trafford proved to be a real heavyweight clash between two of the biggest European clubs in the world with world class players such as: Paul Scholes, Ryan Giggs, Cristiano Ronaldo, Wayne Rooney, Alessandro Nesta, Paulo Maldini, Andrea Pirlo, Clarence Seedorf and Kaka. The Rossoneri humiliated United 3-0 in the second leg at the San Siro to progress to the Champions League final against Liverpool.

AC Milan bet Liverpool 2-1 at the Olympic Stadium in Athens, Greece to win the 2007 Champions League. Filippo Inzaghi was the hero in Greece as he scored both goals as Milan captured their seventh European Cup in the clubs history. AC Milan has also enjoyed success at Old Trafford winning the 2003 Champions League final on penalties against arch rivals Juventus.

The fall of the both clubs

Having been arguably the best team in Europe during the 2000’s winning two Champions Leagues in 2003 and 2007, AC Milan have been on a near-decade long decline ever since their last Scudetto in 2011. The seven-time European champions have not qualified for the UEFA Champions League in seven years, they have not won the Serie A title for almost a decade and they finished 6th last season.  Qualification for the Champions League has become increasingly harder in the recent seasons with Serie A’s co-efficient permitting only the top three positions to qualify for Europe’s major club competition.

Legendary owner Silvio Berlusconi sold AC Milan to a Chinese consortium in 2017 for £720 million. The Italian’s 31 year ownership was by far the clubs most successful period, with Berlusconi overseeing seven Serie A titles and five Champions League titles. Berlusconi was forced to sell to a Chinese consortium in 2017 due to the club’s rising debts and this turned out to be a mistake, with their takeover being based on a hedge fund investment. After failing to pay two instalments on time, Elliott Management, who helped finance the takeover, took legal action and were granted immediate ownership of the football club. Elliott Management immediately appointed Ivan Gazidis as the club’s chief executive and he was responsible for restructuring the entire football club.

The Rossoneri’s infamous scatter gun transfer policy has been a reoccurring problem for the past decade coinciding with nine managerial appointments. The club have spent an estimated £500 million on players since their last Scudetto title in 2011 which has caused the club financial difficulties and created an unbalanced squad of players from previous managers tenures. However, the arrival of respected manager Stefano Pioli in October 2019 has proved to be an astute appointment from chief executive Gazidis as the Rossoneri finished 6th in Serie A last season, which was their highest league position in six years. Pioli’s appointment was first questioned by Milan fans due to his previous allegiances to arch rivals Internazionale but his impressive performances soon got them on his side. Chief Executive Gazidis change in transfer policy proved to be working with the Rossoneri acquiring excellent signings such as Theo Hernandez, Ante Rebic, Simon Kjaer and Zlatan Ibrahimovic for relatively low transfer fees.

Following the retirement of the legendary Sir Alex Ferguson as manager in 2013, Manchester United have desperately struggled for the last eight years. Executive vice-chairman Ed Woodward has been in charge of the club since David Gill’s departure in 2013, and he is already on his fourth managerial appointment with club legend Ole Gunnar Solskjaer after sacking David Moyes, Louis van Gaal and Jose Mourinho. United’s major problem since Fergie’s retirement has been the erratic business in the transfer market with Woodward spending in excess of £1 billion on transfers in 8 years. Jose Mourinho enjoyed relative success during his period winning the Carabao Cup and Europa League in the 2016/17 season before getting sacked after turning the club toxic midway through his third season.

However, there have been signs of progress under current manager Solskjaer since his appointment as permanent manager in March 2019. Solskjaer has oversaw a major squad overhaul getting rid of underperforming high earning players like Alexis Sanchez and continually promoting academy graduates to the first team squad.  Last season the Red Devils finished in third position and reached three successive semi-finals in all cup competitions which can be deemed a relatively successful season. Solskjaer’s transfer dealings have been excellent with the acquisitions of Harry Maguire, Aaron Wan-Bissaka, Dan James and Edison Cavani all deemed successes. There is an air of optimism around the club for the first time since Fergie’s retirement with the feeling that Solskjaer could potentially be the man to bring success back to Old Trafford.

Manchester United are in a very similar position to AC Milan in many respects, with both clubs sitting second in the league table to their city rivals and title aspirations have diminished over recent weeks. Both clubs will be looking to achieve a second placed finish and a trophy which would be considered a successful season.

The Rossoneri remain in second place in the table winning an impressive 17, drawing 5 and losing 4 matches in 26 matches in Serie A. Manager Stefano Pioli has implemented his preferred 4-2-3-1 formation which usually consists of: (Donnarumma, Calabria, Kjaer, Romagnoli, Hernandez, Tonali, Kessie, Rebic, Calhanoglu, Diaz, Ibrahimovic). Keeper Gigi Donnarumma has impressed again this season and has kept a respectable 10 clean sheets and only conceded 27 league goals so far this season. Manager Pioli will be pleased with his Milan side’s defensive progress with them boasting the fourth best defensive record in Serie A so far this season. Captain Alessio Romagnoli has formed a strong partnership in central defence with Denmark international Simon Kjaer which will be vital during the latter stages of the season. French left back Theo Hernandez has impressed with his attacking ability and has scored an impressive 4 league goals so far this season. Ivorian Franck Kessie has formed a productive partnership with young Italian prospect Sandro Tonali in the centre of the park.

The Rossoneri fought of plenty of competition to bring the highly coveted youngster to the club from Brescia and he has all the attributes for a successful career with Milan. Meanwhile, perhaps the best piece of business in recent years was the arrival of Zlatan Ibrahimovic back to the club on a free transfer. The Swedish legend has proved age is just a number scoring a remarkable 14 league goals in 14 appearances in Serie A so far this season. He has been struggling with a calf injury which has limited his availability throughout the season but Pioli will be hoping he can fire the Rossoneri to Europa League glory and qualification to the Champions League.

Manchester United are now unbeaten in 11 consecutive games since defeat to Sheffield United on the 27th January and are fresh from a dominant 2-0 win away to runaway Premier League leaders Manchester City last Sunday. The Red Devils briefly topped the table in the middle of January and the prospect of a title challenge proved to be quite premature as Solskjaer’s side failed to keep pace with Pep Guardiola’s Manchester City. However, United have shown plenty of signs of progress this season under Solskjaer and will be hoping to solidify second place in the Premier League before turning their focus to winning some silverware in the Europa League and FA Cup.