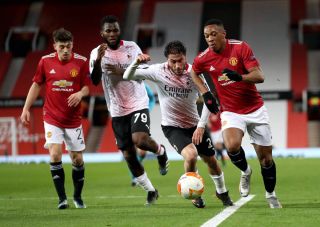 Anthony Martial did little in the first-half but his injury comes as a blow to Manchester United.

Ole Gunnar Solskjaer was forced into a change at half-time after Anthony Martial hobbled down the tunnel at half-time.

It gives Amad Diallo a chance to make a difference against an AC Milan side which dominated the first half.

United take on an in-form West Ham side this weekend and already have Marcus Rashford out injured. With Edinson Cavani also doubtful to be fit to face the Hammers, it gives Solskjaer limited options up front but it comes at a time Daniel James is fighting his way back into the team selection.

Mason Greenwood is another who will be expected to take on extra responsibility for however long Rashford and Martial are sidelined with injury. I suspect Solskjaer will give an update on Martial’s knock after the match tonight.

This, of course, means Diallo is in line to start this weekend in the Premier League.

We’ve really missed Rashford tonight and the team needs a spark if they’re going to hit the back of the net.

The rest of the match is a good chance to make a good impression on the manager.