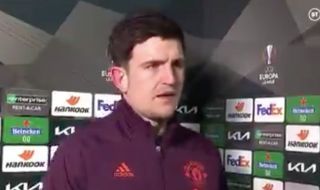 Harry Maguire missed a golden opportunity and Manchester United threw away their one goal lead in stoppage time.

More questions are going to be asked of Maguire and possibly Daniel James for missed chances than what would have been the case had United held on until the full-time whistle.

Maguire makes a valid point that it explains why he’s a defender and not a forward but I’m not buying that. It was put on a plate for him and I’d expect Lee Grant to bury the chance.

I, however, credit Maguire on taking responsibility for his miss. He’s clearly not happy about it or the result, so it’s back to the drawing board for the team as a whole.

“I should score, I’m not going to make any excuses,” Maguire told BT Sport.

"I should score, I'm not going to make any excuses."

Harry Maguire called for a better performance in the second leg after late disappointment at home to AC Milan.

Maguire goes on to speak about Diallo who opened his account for the club tonight.

United will need to play better in the second leg next Thursday if they are to reach the next round of the Europa League.