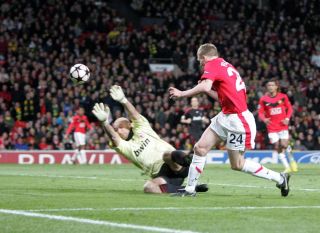 It was the night David Beckham returned to Old Trafford as Manchester United swept past AC Milan into the Champions League quarter-finals – winning 7-2 on aggregate.

Arriving back to face his former club at Old Trafford, Beckham only managed a 27-minute appearance as a substitute, but the focus of this article is our new technical director Darren Fletcher.

The Scottish midfielder knew a thing or two about scoring against AC Milan and we hope the players can take inspiration tonight when they take on the Italian giants in the Europa League.

United’s official Twitter account shared the goal this afternoon, with Rafael Da Silva gifting Fletcher a stunning cross over the top for him to score.

Our new Technical Director knows a thing or two about scoring against AC Milan 😉#MUFC pic.twitter.com/4Ctb5MSvJu

Hopefully it will be the same again tonight.