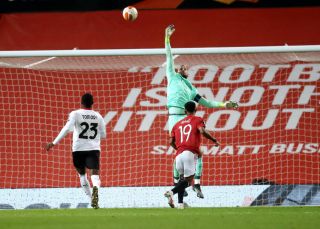 Amad Diallo will be the talk of the town after tonight’s second half display.

The Ivorian winger replaced an injury Anthony Martial at half-time and scored with a brilliant header just minutes after coming on.

Manchester United didn’t do enough to win the game though, with sloppy goalkeeping from Dean Henderson proving costly at the very end.

Diallo was in dreamland as he celebrated his first goal for United.

The 18-year-old opened his account with his first-ever shot for United.

Statman Dave tweeted Amad’s game by numbers versus AC Milan on Twitter at full-time, which you can see below:

The winger won all of his tackles and had an 84% pass success rate, 1 shot and as many goals.

I’m sure the manager has big plans for Diallo because he still has loads to learn. It will be interesting to see if he plays at the weekend against West Ham after Martial’s knock.

With youngsters like Shola Shoretire and Mason Greenwood also seeking game time, Amad has healthy competition and we can’t wait to see who really shines through in the coming years.

Solskjaer has an incredible amount of young talent at his disposal and it’s partly down to him how good these players become.