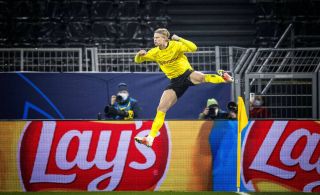 I enjoyed watching the Champions League last night. We had late drama in Turin and Dortmund, with FC Porto knocking out Juventus and Borussia Dortmund just getting over the line against Sevilla.

My main focus was Dortmund v Sevilla because I wanted to keep an eye on the players United are constantly being linked with… Jadon Sancho and Erling Haaland feature regularly in the United gossip columns but young Jude Bellingham had a decent second half last night and should also be on our radar.

Erling Haaland, a United target according to the MEN, was the star of the evening as is usually the case when Dortmund play in the Champions League. He scored twice in Dortmund’s 2-2 draw with Sevilla that saw them progress 5-4 on aggregate.

With seven minutes on the clock, Haaland scored only to see it wrongly ruled out for barging through a Sevilla centre-back. VAR later instructed that a penalty should have been given for foul on the Norwegian in the previous phase.

👀 How would you describe Erling Haaland to someone who hasn't seen him play?#UCL pic.twitter.com/GSyqMDNbPb

More drama followed as Haaland missed the penalty and Bono was found off his line. He took the penalty again before hitting the back of the net and got in the keeper’s face.

Over seven minutes of chaos from Dortmund vs. Sevilla! 😂 pic.twitter.com/QjI4CLQs8r

The striker was mobbed by furious Sevilla players as a result.

It was a brilliant moment in the game and I can’t wait to see United back in the competition. We would stand a much better chance with Haaland than without.