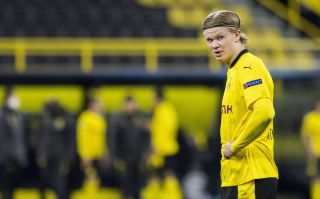 The Manchester United manager spoke to the press this afternoon ahead of Thursday night’s Europa League clash against AC Milan and the journalists were waiting to ask another question about Erling Haaland after his brilliant brace against Sevilla in the UEFA Champions League.

On Tuesday night, Haaland became the youngest and fastest player to reach 20 Champions League goals. He’s got real pedigree and I don’t know any United fan who doesn’t want the club to sign him.

Solskjaer revealed that he would congratulate Haaland personally.

“It was just a matter of time before he scored more goals than me in the Champions League,” said Solskjaer, as per the MEN. “Not many more superlatives to use. Whatever I want to say in Norwegian directly to him.”

It would be a fascinating chapter to Ole’s time as Manchester United manager if he could bring Haaland to Old Trafford. He’s worked with him before so why not?

I think Haaland will end up in the Premier League at some point, and whoever lands him will have a huge boost in delivering league titles. That’s where we want to be and fans will be excited by today’s football director announcement.