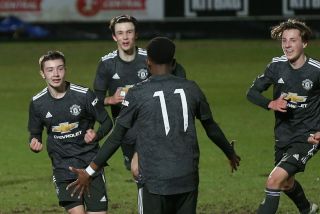 Despite the pitch inspections and the postponement, United’s FA Youth Cup campaign is finally underway.

The first minutes started well for Manchester United as Noah Emeran played a brilliant ball through, but no one was there to get in the end of it. Despite some good moments at the beginning, United clearly had to work with the small passes as the players kept losing possession. Salford was moving on tight spaces and our youngsters had to remain cautious upfront. After the 15th minute, United were looking more mature and this was shown after another brilliant run from Emeran.

As 20 minutes passed by, United were more in control of the ball as Fernandez, Savage and Emeran were moving around, but we were lacking end product. Salford’s Ben Finley was trying to set something for the home side, but the ball was cleared right away. Afterwards, United had three clear chances through McNeill and Savage after the former received a brilliant ball from Hansen. The defence and Evans made it possible to keep the game level still.

United were not finished as a brilliant run from Garnacho put Salford City in danger yet again, as the United youngster makes it past Salford’s number 7 only to have his shot saved. Our youngsters had been on top of the game, but Finley and Pedro were not messing around as they kept creating chances for Salford. It was the right moment for United to take control of the game and so it happened, as a superb cross from Hughes found Daniel Gore who made no mistakes.

Despite going ahead, United still had a lot to do as Salford once again showed that they are very much in the game. It could have ended in disappointment given that there was no VAR in the game.

Salford took their corner one foot away from the quadrant and the ball almost went in. Vitek was caught off guard, but things ended quietly in the first half. United got a wakeup call that this tie was far from over.

This was the theme of the opening minutes of the second half as Salford were more on the ball with Hardley dealing several times with Pedro in just a few minutes. By the 52nd minute, the United full backs were pushing forward from left to right, giving Savage who is good on the ball to move up in the pitch. United’s best player had been Hansen who has been superb on and off the ball for United.

Hardley was also involved on a fantastic vertical pass to Garnacho who must have been disappointed with not finishing that one, however Charlie McNeill should also have been involved and may have had the chance to score. On the other hand, we see that United have changed tactics as Emeran and Garnacho swapped wings while Daniel Gore was substituted and made room for Marc Jurado who now will move at right-back, Hughes at left-back and Savage down the middle, but slightly more forward. Despite a fiery start from Salford, United are now more in control of the ball.

A goal in each half secures our place in the #FAYouthCup fourth round, with the Reds due to face either Liverpool or Sutton United! 💪 pic.twitter.com/efhjlSmdLI

Another goal was needed to keep Salford at bay and after a ball from Garnacho; the usual, yet exceptional Charlie McNeill goes past the defender in a flattering way and finishes in the top corner. All of this while the talk was about a strange quiet evening from Charlie, well it was getting annoying with all due respect. Clearly, United certainly were not satisfied with the result as Emeran is brought down, but the penalty appeal is not only waved away, but the player was also booked for diving, a very questionable decision.

It just did not seem Garnacho’s night in terms of finishing as he gets another chance, but his effort is well over the bar. In the 86-th minute Svidersky comes off for Mainoo, as United have the game well under control. The pitch conditions are not optimal, but this has not prevented the youngsters from a good display, despite a few struggles early on, in the beginning of both halves. The result is quite important indeed, but it is the performance that matters as well. Here the players showed the maturity and calm, especially in the first half where Salford City U18’s would have taken the lead.

In the next round United will play at home as they will get to know their opponent next week whether it will be a classic against Liverpool or we will be playing Sutton United.