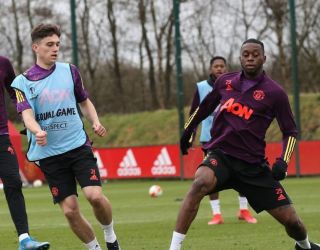 Manchester United take on AC Milan in the Europa League round of 16 tomorrow night, so the coaches have been busy putting the players through their paces at Carrington.

The manager has a number of injuries that restricts his options for the game.

Edinson Cavani is another doubt, with both Paul Pogba and and Donny van de Beek unavailable.

From the pictures shared on Twitter today we can see Dean Henderson being worked between the sticks. The young goalkeeper is set to make his third consecutive start for the first team.

Fred is pictured putting a challenge in on Shola Shoretire. The youngster is not likely to get many minutes unless United are sailing into the second leg — like we did in the previous round against Real Sociedad.

Daniel James and Aaron Wan-Bissaka are also pictured and we expect both players to start versus Milan.